By Gregory – Tel Aviv, Israel, the destination of my 2012 summer holiday. Colleagues and friends asking me: ‘What on earth are you going to do there? Are you sure it’s safe? Can’t you choose a ‘normal’ destination for your holiday?’ Ok, I’ll be honest, I like a bit of adventure.

But when my plane from Brussels landed in the middle of the night at Ben Gurion International Airport, my eyes opened. I always hoped, somewhere deep in my heart, that Israel would not be as it is so often described in the news.

And there I was, riding in a taxi, Tel Aviv’s skyline getting closer, about to uncover a whole new meaning to the word Israel.

The first impressions I had from this Mediterranean metropolis were of openess, internationalism and cultural diversity. An image that does not comply with what is generally depicted in the media. But can this city hold on to this vibrant lifestyle?

Israel has many problems. First of all Israel has a problem with its neighbours. Israel lives in relative peace with Egypt and the Kingdom of Jordan. It is however still on a knife edge with its two northern neighbours. Lebanon with Hezbollah within its borders, and other Middle East countries including Syria and Iran want to wipe Israel off the map as they can’t live with a liberal Jewish state at arm’s length from their own borders.

And then there is the Palestinian question. I am not in favour of the occupation of the West Bank and I am a believer that Israel should evacuate the occupied territories in order to seek a viable and durable peace settlement with the Palestinians.

Jerusalem on the other hand is a more complicated issue for which I haven’t got an answer. It is too easy to claim that a Palestinian state should have East Jerusalem, including the Old City as its capital. The Old City is holy ground for the worldwide Jewish community, the Muslim world and Christianity. Palestinians, including terror groups such as the Islamic Jihad and Hammas claim East Jerusalem on the grounds that the Al Aqsa mosque and the Temple Mount should have a central role in an independent Palestinian state. But what many do not know is that the mosque has been built by Muslims in 637 AD on top of a synagogue that once was part of the Jewish temple complex first built 1600 years before hand. Is it fair to ask the Jewish community to hand over what they consider as the holiest place on earth and never be able to return to it?

What I’ve described so far are the common issues Israel is facing. But after having travelled through the country I’ve discovered a far more pressing issue. That of a liberal, open minded and welcoming country struggling with a rather introvert and outdated world view commonly used by its ultra-religious inhabitants and neighbours. 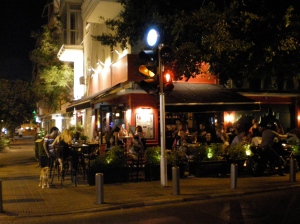 Most of the muslim world, on Israel’s doorstep, is not compatible with secular Israel, especially with Tel Aviv where there is a non stop, 24 hours lifestyle, where its inhabitants enjoy themselves on the beach, in theatres, bars, restaurants and nightclubs. A city where people of all sorts, religious or secular, black or white, Jewish or Arab Israelis, gay or straight live side by side in harmony.

There is also a danger to this lifestyle from inside Israel’s borders. The Jewish Orthodox community, strive for an Israel where this free and secular lifestyle is seen as a sin.  They want the whole country to live by the rules of the Torah. A segregated society, where women are seen as near to second class citizens. These are the Israeli’s who are building settlements and inhabiting the disputed West Bank. Many of the Orthodox Jews choose not to work, devoting their time to theological study and raising their many children in strict obeyance of the religion. These families are furthermore excempt from Israel’s mandatory military service. It’s therefore something of a paradox that in general, Orthodox Jews are neither contributing to the welfare state that supports them, or the army that protects them.

With the orthodox population growing at a faster rate than the secular population, secular Israelis are concerned that they will soon find themselves in the minority. Not only would this jeopardise a vibrant, innovative and open society, but would likely further increase tensions in the region.